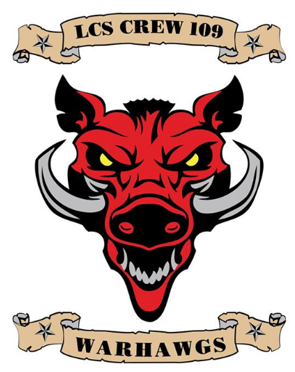 The new USS Little Rock is one of the Navy’s newest warships. It was built in Marinette, Wisconsin and is a Littoral Combat Ship (LCS) that will operate in waters close to the shore. The vessel also has a helicopter pad, a ramp for small boats and can be used by small assault forces.

The original USS Little Rock began its service as a light cruiser when World War II was coming to an end in 1945. It was officially decommissioned in 1949 and recommissioned in 1960 as a guided missile cruiser, before being taken out of service in 1976 and brought to Buffalo.

The name of the original USS Little Rock and the new vessel both pay tribute to Arkansas’ state capital. In her role, the USS Little Rock will play an important role in the new fleet of warships that will carry out our nation’s future maritime strategy.

FROM THE GROUND UP

1,976,000
Number of gallons per minute that go through the ship’s 4 waterjets can fill an Olympic sized swimming pool in 20 seconds
113,710
Horsepower of the Combined Diesel & Gas Turbine engine propulsion plant
3,400
Full Load displacement
2,000
Tons of steel in USS LITTLE ROCK
1,000
Total number of tracks the new radar can handle simultaneously
1,000
Tons of aluminum in USS LITTLE ROCK
360
Average cost in millions for 10 ships under the block buy contract
150
Percent increase in number of ports LCS shallow draft enables
100
Miles of electrical and fiber optic cable in USS LITTLE ROCK
98
Total crew berthing – less than half the number for the Frigate it replaces
96
Maximum number of hours to swap out a warfighting mission package... most swaps conducted in less than 24 hours
45
USS LITTLE ROCK’s top speed in knots...fastest surface combatant in the fleet