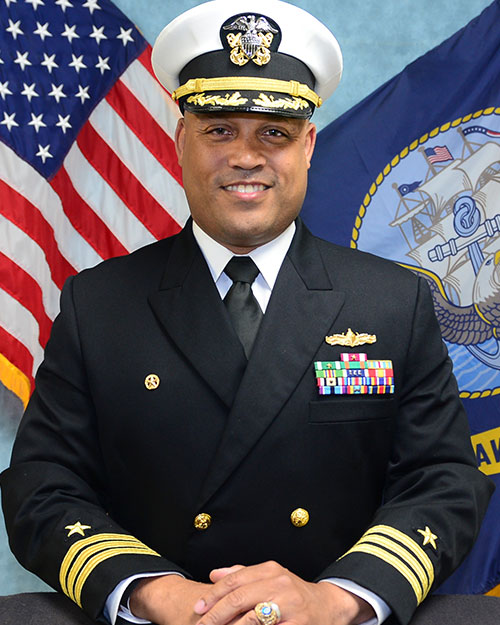 Brian Crosby is a native of North Carolina. He obtained his commission as a Surface Warfare Officer from the United States Naval Academy in 2001, graduating with a Bachelor of Science in English.

Commander Crosby completed his division officer tours aboard USS LEYTE GULF (CG 55) as Damage Control Assistant, deploying to the Arabian Gulf in support of Operation Enduring Freedom, and Training Officer aboard USS DEWERT (FFG 45) conducting Counter Narcotic Operations in the 4th Fleet AOR. As a department head he was Operations Officer onboard USS O’KANE (DDG 77) home-ported in Pearl Harbor, Hawaii and USS COWPENS (CG 63) forward deployed in Yokosuka, Japan.  He was Commanding Officer of Patrol Coastal Crew MIKE and subsequently USS TYPHOON upon the ending of rotational crewing.  During his command USS TYPHOON was awarded the 2014 Battle “E” award for Patrol Coastal Squadron One.

During his shore tours he attended Naval Postgraduate School, receiving a Master’s Degree in Systems Engineering Analysis and completing Joint Professional Military Education Phase I. His most recent tour was as Sea Power / Surface Warfare Analyst, in Assessments Division (N81) on the OPNAV Staff. 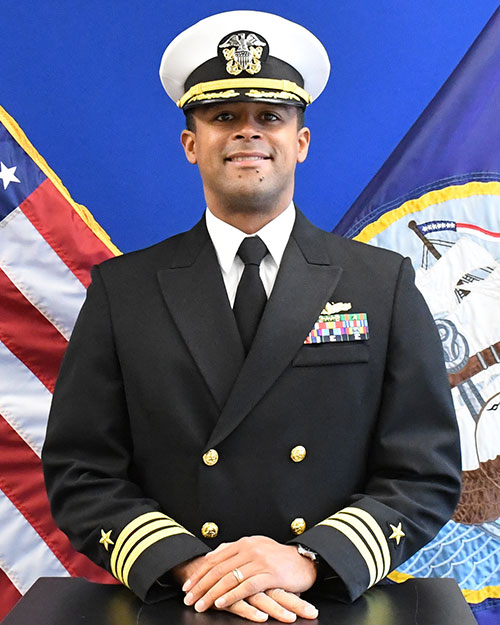 Commander Jason Jeanpierre is a native of Baton Rouge, LA. He was commissioned in 2003 from the United States Naval Academy, receiving his Bachelor of Arts degree in Economics.

Previous at sea assignments include a tour as Missile Officer in USS TICONDEROGA (CG 47) in Pascagoula, MS where he where he contributed to the ship winning the COMDESRON 14 Gunslinger Award. He later served as Electrical Officer and CIC Officer in USS WHIDBEY ISLAND where he was able to participate in the 2006 Lebanon Non-combatant Evacuation Operations. His Department Head tours were served as the Operations Officer onboard USS OSCAR AUSTIN (DDG 79) and USS LEYTE GULF (CG 55). 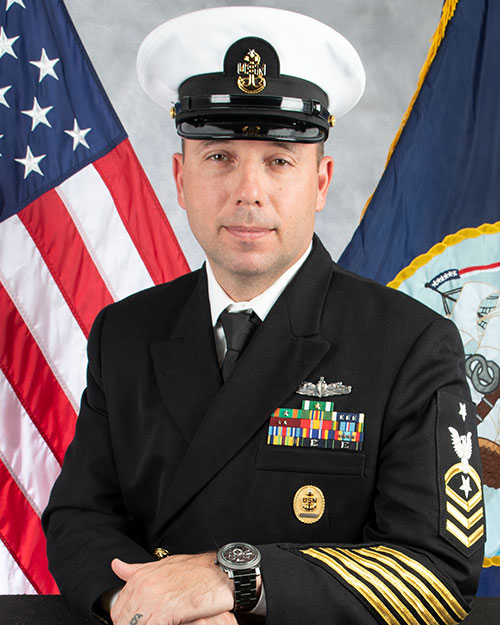 Command Senior Chief (Surface Warfare) Scott Callaway was raised in Kansas. He graduated from Derby High School in 1995, enlisted in the Navy in August 1998, and attended Recruit Training in Great Lakes, IL. After that, he completed Sonar Technician ‘A’ and ‘C’ schools at Fleet Anti-Submarine Warfare Training Command San Diego, CA.

In November 2006, he reported to Littoral Combat Ship Pre-Commissioning Detachment San Diego and served as the Leading Petty Officer before transferring to USS Dewey (DDG 105) in April of 2008.

In October 2010, he reported aboard USS Sterett (DDG 104) where he served as CA Division Leading Chief Petty Officer, and deployed twice in support of OND and OEF.

In June 2012, he reported to Commander Naval Surface Atlantic Norfolk, VA where he served as Force Sonar Technician. His follow on orders were Commander Surface Squadron Fourteen Mayport, FL as the Anti-Submarine Warfare Officer in 2015 and in USS The Sullivans (DDG 68) serving as Departmental Leading Chief Petty Officer in 2018. During this time, he earned an Associates Degree in Business, attended the Senior Enlisted Academy, and was selected into the Command Senior Chief Program.